All views expressed are the authors’ own and do not necessarily reflect the official position of any agency, organization, plan sponsor or company.

High-cost drugs have always posed a significant risk for the financial health of group insurance plans. Without an appropriate risk-pooling mechanism to address this issue, many plans would be unable to bear the cost of claims.

Let’s imagine the case of a company with 50 employees providing full group insurance coverage, at an average annual cost of $4,000 per employee.

An employee is then diagnosed with a condition that requires the recurring purchase of a specialty drug costing $200,000 per year. Without pooling of catastrophic risks with other plans, the average cost required to insure this group could double, rising from $4,000 to $8,000 per employee. In all probability, this would make the plan unaffordable.

A pooling mechanism has been set up to prevent such situations from arising. Pooling allows high insurance costs to be spread over all private plans, rather than being borne by a single insurer or employer. Pooling can apply to drugs only, or more broadly can include all medical treatments. Also, claims incurred abroad, which can represent astronomical sums, are generally pooled on a separate basis.

In January 2013, all insurers in Canada set up a nationwide mechanism for pooling with regard to medications: the Extended Healthcare Policy Protection Plan (EP3). This mechanism applies only to fully insured groups. Each participating insurer must prove that it meets EP3 standards but has the flexibility to adapt certain aspects of the EP3 standard such as pricing, the pooling threshold, and the drug list.

The origins of the QDIPC

In Québec, as a replacement for the EP3 agreement, the Québec government’s Act respecting Prescription Drug Insurance requires that all insurers and administrators of private employee benefit plans (called “Participants”) pool drug-insurance risks for their members in Québec. As a result of this requirement, the Québec Drug Insurance Pooling Corporation (“QDIPC”) was set up in 1997.

The QDIPC is, therefore, a pooling system aimed at sharing catastrophic drug-cost risks between its Participants, made up – as of January 1, 2020 – of 18 insurance companies and 11 benefit plan administrators.

For 2021, the following terms and conditions have been determined. They represent a significant rise in expected pooled claims over 2020:

These terms and conditions are set in order to meet two main objectives:

Over the past three years, the average yearly increase of annual factors has been between 8% and 23% depending on the size of the group (over the past 10 years: between 6% and 35%).

This high rate of inflation is expected to continue. This is because several new expensive therapies are expected to come onto the market, particularly new medication to treat certain cancers as replacements for chemotherapy.

In 2019, pooled claims in Québec (i.e. per-certificate claims above pooling thresholds) represented approximately $115 million out of the $3.7 billion total claims on the private drug insurance market, that is, a 3% share.

Evolution of claims pooled by the QDIPC over the past three years: 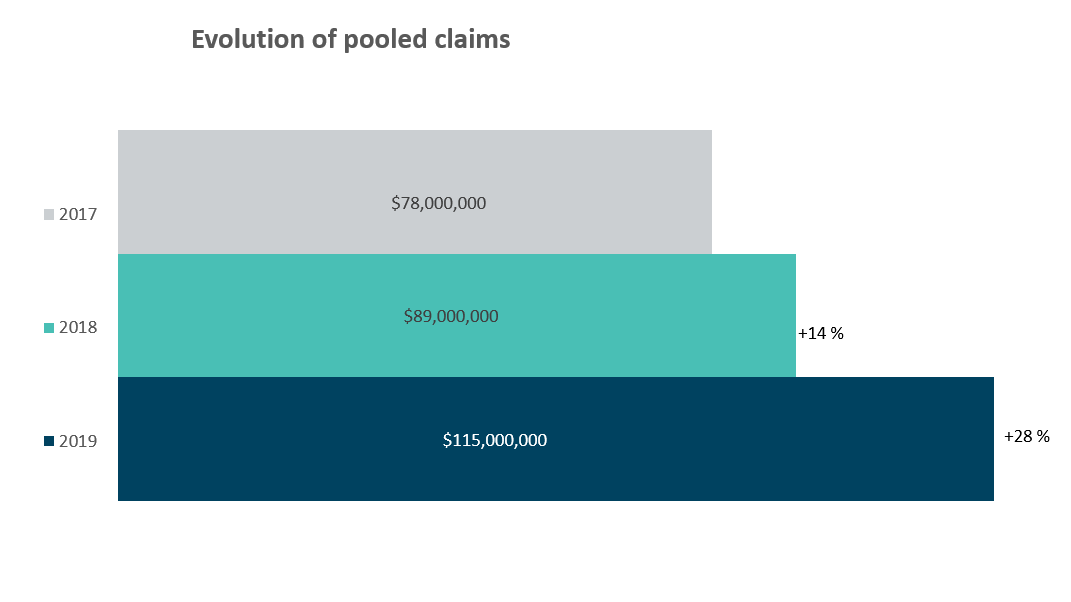 From 2014 to 2019 the number of certificates with claims exceeding $300,000 per year rose from 12 to 64, with the corresponding costs rising from $6.4 million to $32.8 million (a rise of over 500% in five years). These “catastrophic” certificates thus represent close to 30% of all pooled claims in 2019. The following graph illustrates this evolution: 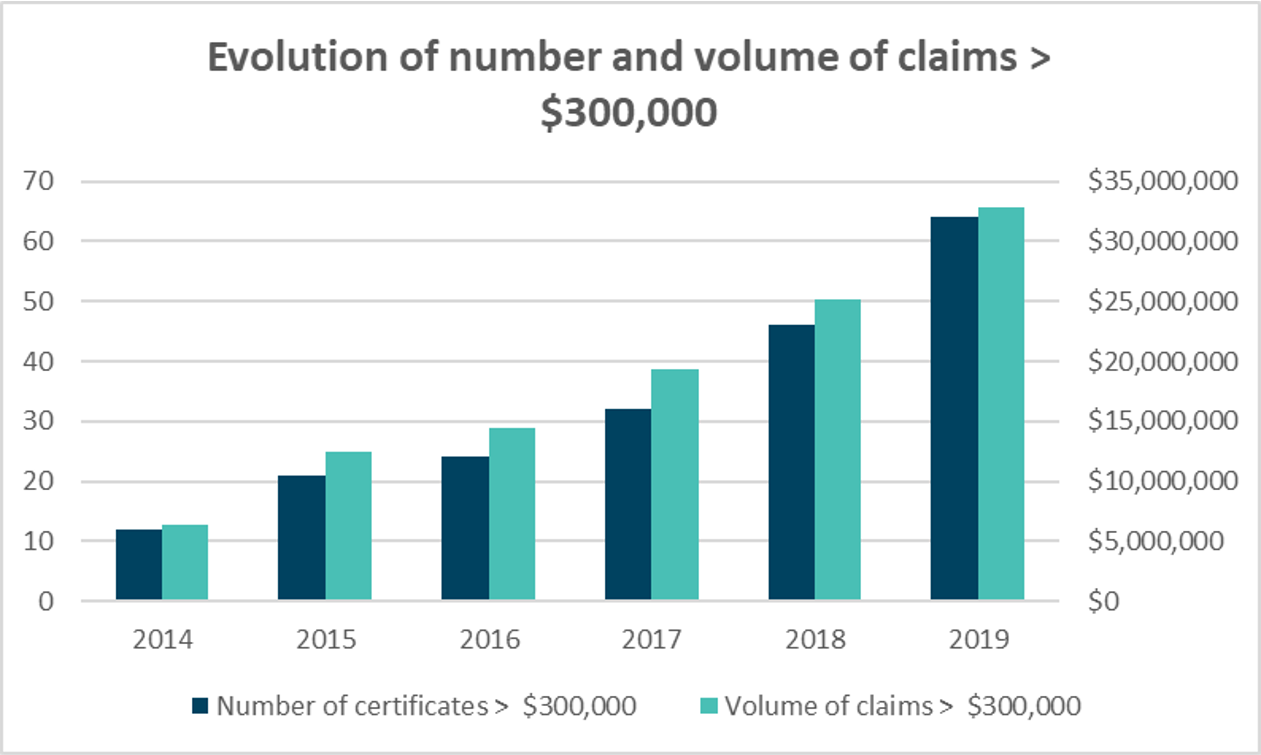 The QDIPC does not apply any adjustment on the basis of groups’ financial arrangements (i.e., fully insured, refund accounting, administrative services only) and covers all drugs reimbursed by Participants. Thus, drugs covered are not limited to the RAMQ list for private plans that offer a more exhaustive list of drugs.

The compensation method between Participants is as follows:

The QDIPC’s operating costs are paid by Participants in a separate invoice, independently of pooled claims.

The example below demonstrates this functioning using three Participants with the following experience in 2019:

The pooling process for Participant A would be as follows:

What plan sponsors must check

At renewal of your group insurance plans, take the time to compare the pooling fees charged by your insurer with the QDIPC pooling cost for a pooling threshold similar to yours (that is, although you cannot have a pooling threshold higher than that of the QDIPC, you could further limit your risk and have a lower threshold). This check will give you a good understanding of the fees that are charged to you.

Potential discrepancies between your pooling costs and the QDIPC factors: