On June 13, 2019, the Québec Minister of Health and Social Services, Danielle McCann, tabled proposed legislation (Bill 31) to amend the Pharmacy Act, as well as other relevant acts, to expand the scope of practice for pharmacists in the province. Bill 31 will amend the Pharmacy Act to facilitate access to certain services, allowing pharmacists to prescribe and administer vaccines, and to prescribe and administer medications in emergency situations.

In addition, the legislation will also allow pharmacists to:

GroupNews will continue to follow the progress of this legislation and provide updates on additional details.

Impact: These changes will put the scope of practice for pharmacists in Quebec in step with other progressive provinces in the country.

In the July 3, 2019 edition of the Gazette Officielle, the government of Quebec published draft regulations to amend the Regulation respecting the application of the Health Insurance Act (Draft Regulations). The Draft Regulations amend section 60 of the Regulation respecting the application of the Health Insurance Act (Regs). Section 60 of the Regs lists the pharmaceutical services that are deemed insurance services for which costs are covered by the Régie de l’assurance maladie du Quebec (Régie). The Draft Regulations expand the scope of services for which costs are assumed by the Régie to include services rendered to a person receiving palliative care, including the establishment of a pharmaceutical care plan focused on ensuring the patient’s relief and comfort, and to services rendered to a patient following a hospitalization lasting more than 24 hours that involved at least three medications prescribed for a period of 90 days or more that need to be added to therapy that is already underway, subject to certain conditions.

Impact: The Draft Regulations will allow pharmacists to be compensated for additional services performed, but may result in additional costs to certain employee benefit plans related to the coverage of the services. 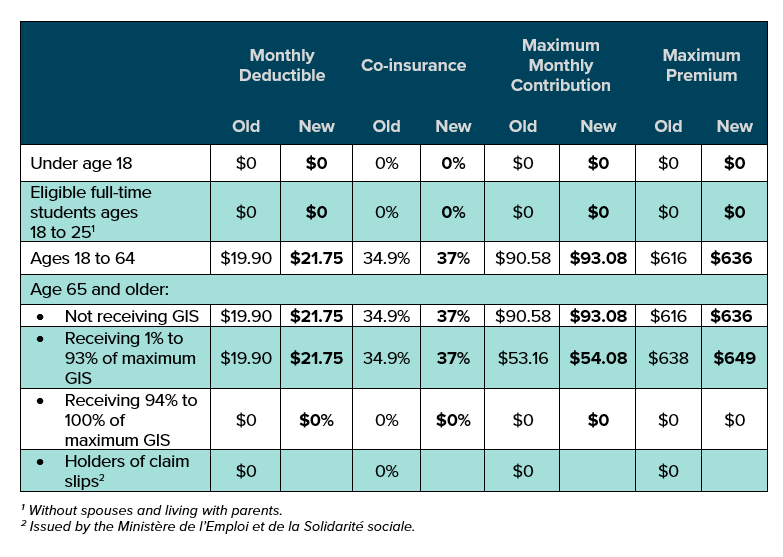 Impact: Private plans in Quebec that provide drug coverage must offer coverage that’s at least equivalent to the public plan. For drugs listed on the RAMQ formulary, insurers’ systems will adjudicate those claims in accordance with the private plan provisions, subject to the minimum RAMQ requirements. Except under certain specific circumstances (for example, a plan member over age 65), active members of a private drug plan are not eligible for RAMQ coverage and the private plan is the payor. As such, these changes to the RAMQ will not significantly affect private plan costs for active members. However, retirees over age 65 who are still eligible for drug coverage under a private plan generally use RAMQ as first payor and their private plans as second payor. Given that these changes slightly reduce the reimbursement level provided by RAMQ (i.e., co-insurance increased from 34.9%
to 37%), a slight cost increase in retirees’ private benefit plans is to be expected.

Impact: Bill 6 came into effect on July 12, 2019. It brings the government of Prince Edward Island into line with other Canadian jurisdictions by introducing more detailed guidelines with respect to a drug formulary. The addition of a more standardized drug formulary will impact benefit plan sponsors, but more details on pricing and the listed drugs will be necessary to determine the full impact of the changes.

Anti-selection and moral hazard are two risks that are common focuses in the insurance industry. Most people have heard of anti-selection – a risk caused by the asymmetry of information available to two parties entering into a contract. In group benefits, it occurs when a member has more information about their own health, or expected future claims, than the insurer or plan sponsor and the plan member selects coverage that benefits them while potentially negatively affecting the benefit plan. The more flexibility and choices a member has, the greater the risk of anti-selection. Moral hazard, a lesser-known concept, is similar but reflects the risk of a change in behavior of one party once the contract has been entered. In the context of group benefits, it’s the risk that members who have had no previous insurance, or a lesser amount of insurance, will claim more than they would have otherwise.

In a recent study, a large plan sponsor’s claims experience was examined to assess the extent to which these two risks existed within the plan. The plan sponsor’s unique benefit structure made them particularly susceptible to these risks, as they provided optional coverage to part-time employees who paid 100% of their premiums. This group was rated together with the full-time employees who paid a small percentage of their premiums. Typically, an insurer would not insure a plan that provides optional 100% employee-paid health and dental coverage to members. However, for this plan, the financial arrangement was ASO (administrative services only), wherein the plan sponsor assumes the risk and not the insurer. The study showed that the part-time employees’ claims were 1.5 to 3 times the average claims of the other members whose premiums were mostly employer-paid. This implied that anti-selection and moral hazard exist within the part-time group, as they would only elect to pay for 100% of their coverage if they believed their annual claims would exceed their annual premiums.

It is common for insurers to consider these risks when rating a group, and restrict coverage and flexibility to limit the risk of anti-selection. For example, they may require a lock-in period to restrict members from opting in and out of coverage without a life change (i.e., birth of a child). However, as we saw with the study above, self-insured or ASO plans are no less prone to anti-selection and moral hazard.

Impact: Plan sponsors should always be aware of the risks of anti-selection and moral hazard, and of the specific plan design elements with the potential to increase those risks. For example, providing flexibility and choices for plan members can increase the risk of anti-selection and benefit improvements, such as decreasing employee cost-sharing percentage or increasing the co-insurance percentage of a benefit, may increase the moral hazard risk.